The fans in the Zimbabwean soccer community are not happy with the way some of their soccer legends are being treated by the powers that be. The Zimbabwe legends recently played Barcelona legends with a sell-out crowd cheering them. The game which ended in a 2-2 draw was highly commended nationwide but a section of fans were irked that some former players were neglected. 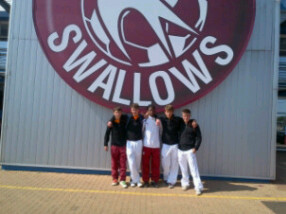 John Phiri was not called up for the game despite being the most capped footballer in the country. He is known to be one of the national soccer heroes but he was not remotely considered as he was allegedly not close to the authorities.

The section of fans also complained that the soccer association leaders prefer to shower recognition on former players when they die. The recent loss of Shadreck Ngwenya is a good example. The former star died in penury. He had reached out to the Zimbabwe Football Association (ZIFA) and DeMbare but none deemed it fit to help the former Dynamos skipper.

Ngwenya led a team of talented players that defeated Orlando Pirates in 1976. His team is still remembered for their football, even more than the Dynamos side that won four straight league titles. He won everything in Zimbabwean football and even the Southern African Club Championship. None of the current stars can clean the boots of Ngwenya yet he died like that. He played and then coached a top South African team Moroka Swallows, a rare feat then that proved his abilities.

As coach he discovered several players that have gone on to do great things, some are still doing till now. Friday Phiri also experienced the same thing as CAPS United claimed they wanted to employ him in their technical department at his funeral. There are other cases and it is an established pattern that Zimbabwe are neglecting soccer greats.